A short tuk-tuk ride to the main Fatephur Sikri junction and then one easy peasy barely-20-minute-and-only-slightly-squeezey bus ride to our next destination- Bharatpur and the Keoladeo Bird Sanctuary. 29 square km of beautiful protected wetland in the heart of North India, Keoladeo is known as one of the most popular sites in the world for dedicated twitchers, as India’s balmy winter climate attracts migrating birds from all corners of the globe.

Bharatpur town itself is maybe 3km away from the park, but we stayed in a lovely guesthouse called Iora, only 15 minutes walk from the park entrance, with a super friendly owner who even gave us a lift in his car over to the park (which although wasn’t very far, but would have been a very hot walk under the 3pm sun). We rented bicycles at the park entrance and set off down the long straight road that leads into the heart of Keoladeo.

The park itself is non-motorised vehicles only, and quiet was encouraged, making it incredibly peaceful away from the constant toot tooting of the main roads. As soon as we left the traffic behind another soundscape was revealed to us – the yow-yeep-yeep ka-choon-choon-choon coo-caw coo-caw chirrrrrrpeep ratchoo-ratchoo of birds and birds and birds.

We soon spotted what I liked to unofficially call a Ginger Nut Crane mooching about near the roadside, which we were very happy to stop and keep company with him for a while- although gauging from the total lack of interest that the passing cycle rickshaws loaded with other park goers and their guides and massive camera lenses, this wasn’t anything particularly special for the park. But we liked him anyway.

The road continued on through more dense jungle and wetland, the lakes bursting over into the grasses, where cows and the occasional sambar deer grazed. We also spotted a stealthy-not-so-stealthy terrapin turtle scooching itself around in the mud.

It was very hot, and we stopped often to clamber off our squeaky bikes to rest on the numerous benches and look out points. About half way down the road, there was a bit of a gathering of people, and large camera tripods and binoculars popped out of nowhere. In the trees, right next to the road side were trees and trees full of nesting cranes – not our little ginger nut friend but much bigger and with pink and red hues on their pearly feathers. Twitchers or no, it was a pretty magnificent scene, with the hundred or so cranes making a raucous din clattering and squonking away at each other, swooping between trees, wingspan sweeping reflections on the water below. It was difficult to get a good picture of the cranes themselves (maybe those people with the massive camera lenses were onto something…) but we enjoyed soaking it all up.

In the very centre of the park the road petered ended, and we parked up our bicycles next to the other waiting cycle-rickshaws. Resting in the shade of the trees, we were invited into the tiniest temple I have ever seen – only room for us 2 and the monk who resided in it. The centre of the floor was carved out like a deep bowl – deep enough that if it was filled with water, a person could to sit inside it comfortably and the water would go up to their shoulders. Inside this dip were flower garlands and candles and burning incense and leaves from the surrounding forest. A metal tripod suspended a copper urn over the leaves, and with the monks direction we poured a little water into the top of the urn. The water trickled down and through, steadily dripping onto the vegetation laid out below. There was something mesmerising about it. Tiny carvings of Shiva and his entourage of friends were positioned around the edges of the bowl. After a donation (of course) of 100Rs (about £1.20 for us) we were given a pinch each of tiny white sugar sweets to nibble, and the monk pressed a bindi onto our foreheads, and tied a piece of red and orange cotton around our wrists. I was feeling pretty content just to sit there and watch the water dripping onto the leaves below, but Rich was feeling a bit sneezey with the incense I think and it was hot in there (as you can probably tell from how sweaty I am in the photo after)…

We left our bikes by the temple, and continued on foot a little way further where the brick road became a dirt path, and then the path became grass and mud, and then finally we arrived on the tip of the peninsular going out into the lakes. There was a look out tower from which you could see the entire park spreading out beneath you. Up amongst the topmost branches of the palm trees, it took us a few minutes before we suddenly realised we were not alone… looking around we found ourselves being closely eyed by a load of (what I hope were) fruit bats- up close they seemed alarmingly huge, their leathery wings currently wrapped around them, but their furry bodies about the length of my arm. But they seemed content just to watch us, and we enjoyed the views of the sun beginning to lower over the lakes below us. 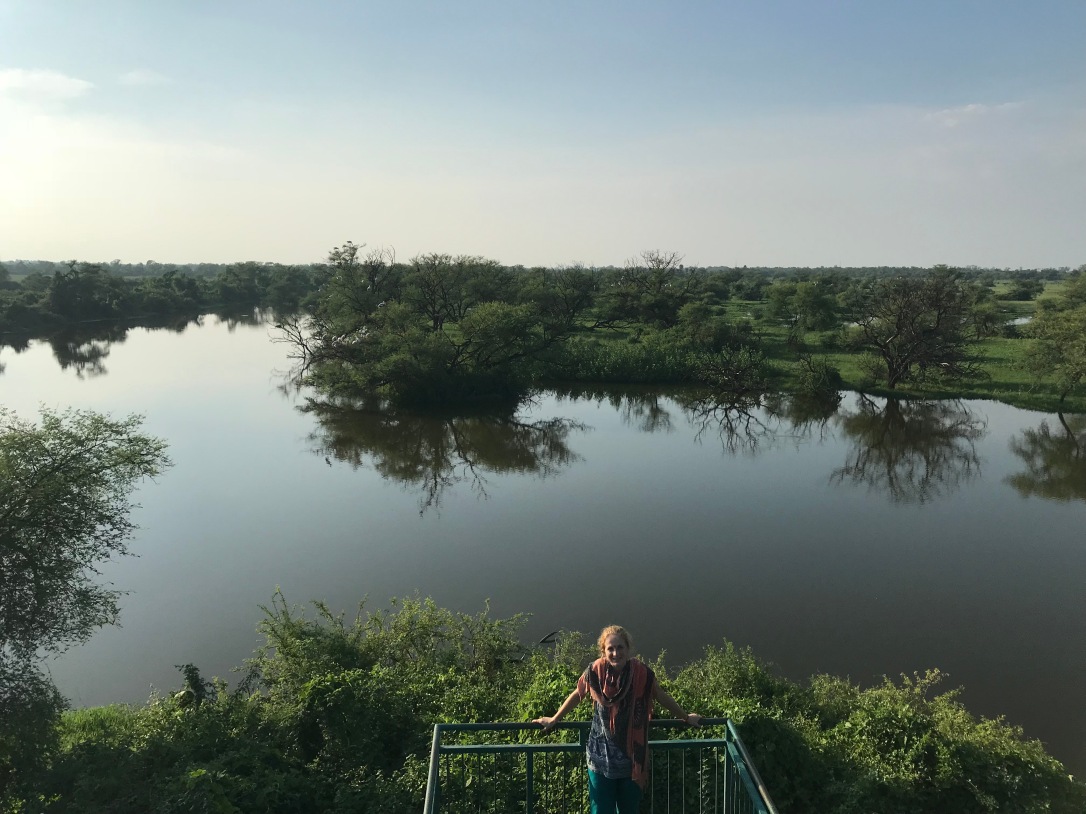 1 night at the lovely Iora, and then onto our next stop… Ranthambore for (maybe) tiger spotting in the wild…!