We arrived in Udaipur by train after the sun had set. Our beautiful guest house, Hari Niwas, welcomed us warmly, and kindly cooked for us a simple but delicious dinner of dhal, chutney, rice and chapatti.

The people of Udaipur claim to be direct descendants from the Suryavanchi tribe (people of the sun), so pride themselves on being clean, polite, well dressed and highly civilised, as well as skilled artists. After the smelly sewage strewn streets of Pushkar, Udaipur was a bit of a dream, with relatively clean streets (or the cleanest we had seen in India so far at least), and relatively non-pushy stall holders selling silver pieces and miniature paintings (Udaipur’s speciality), as well as rooftop resturaunts offering us beautiful views over the lakes.

From the roof of our guest house we looked over Udaipur’s ramshackle houses, stacked on top of each other like boxes, reflecting the sunlight in a patchwork tapestry of whites, blues, yellows and pinks. Even the cows looked more healthy here, with many people gifting them fresh grasses and extra chapattis, hoping to get some good karma for their actions in return. In India, the first chapattis of the day are given away, the first as an offering to the gods, second to feed to the cows, the third goes to feed the dogs, and the fourth is left out for the sparrows.

Although it’s not all happy families- there are rising problems with dogs attacking wildlife, and cows trampling and destroying farms. This is especially the case with the bulls who, not being any able to provide milk, are abandoned  by their owners to roam freely. This problem is made worse by the fact that all cows are revered by Hindu’s, so they will never be used for their meat (not that I’m advocating meat eating of course), but the population continues to rise uncontrollably. The weirdest thing of all, is that although beef will never ever be served on a plate, there is still leather everywhere in the markets being sold as luxury shoes, bags, and belts. Rather than being sold as cow leather, it’s advertised more vaguely as ‘animal’ leather- ignorance is bliss? 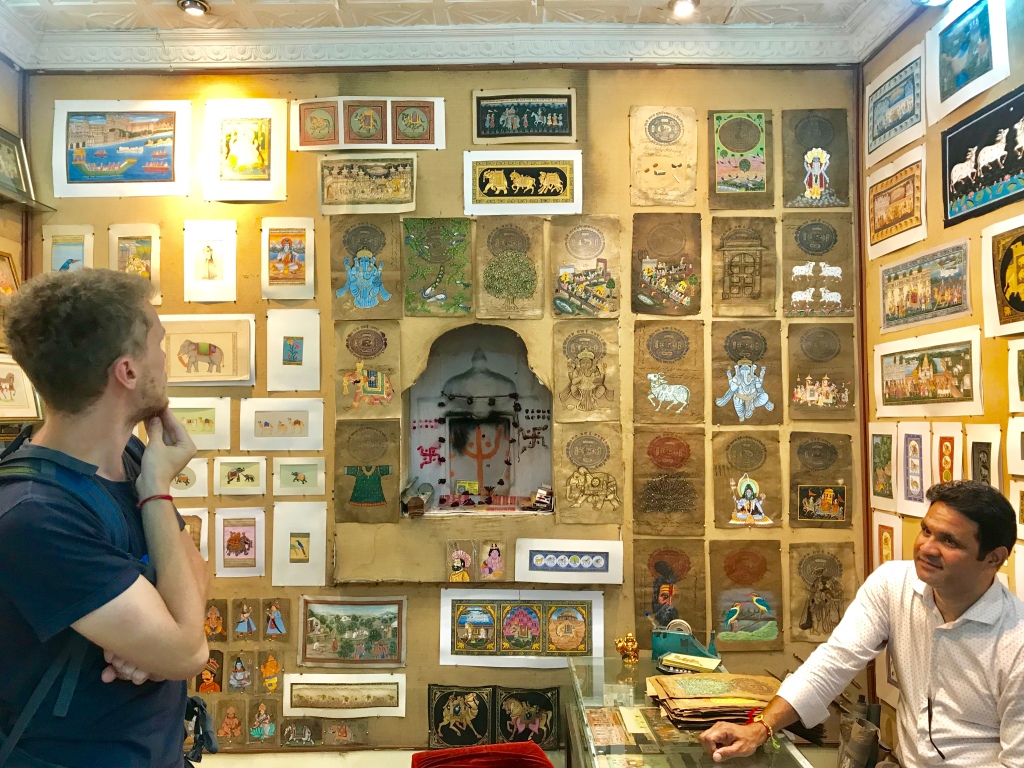 The natural place to start when exploring Udaipur is at the monumental yellow stone City Palace. This vast fortress looms over the rest of the city, housing a breathtaking display of Rajasthani art. Every surface in every room (including the exterior of the building) is lavished with swirling Indian designs. Stain glass patterns the polished marble floors, spilling blue, red and green light over our feet. Ceilings are handprinted, and richly embellished with reflective crystals and patterned mosaic tiles. Ornate balconies and intricately hand carved screens. Doors displaying rainbows of peacocks (the national bird of India). We were led through room after room of splendour, following a maze of tiny corridors where it was cool and quiet and dark, before suddenly opening out into vast courtyards full of light and air, havelis and gardens lined with fountains and trees. 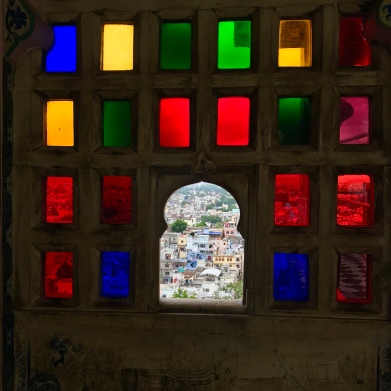 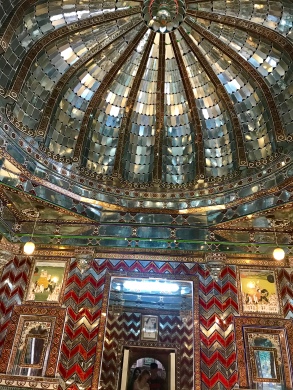 Making our way steadily through the palace rooms, trying to avoid the Indian tourists asking us for selfies, we finally came out on the picturesque lake side of the fortress. Overlooking Lake Pichola we enjoyed possibly the finest coffee drinking experience I have ever had the pleasure of. Gazing out over the lake we had the finest views of the Taj Lake Palace – that seems to float serenely in the centre of the lake – and the island of Jagmadir – where the Indian royal families would escape to when the bustle of the city got too much – and then beyond to the jagged green hills where wild peacocks and monkeys roam.

We took a boat trip around the lake, stepping off briefly at Jagamadir to enjoy the views back over towards the city. All around the water’s edge, locals bathed their feet and waved merrily at us. Women washed their clothes whilst gossiping to each other on the stone steps, and teenagers tried to out do each other- belly flopping in off the low walls that fringed the shoreline. 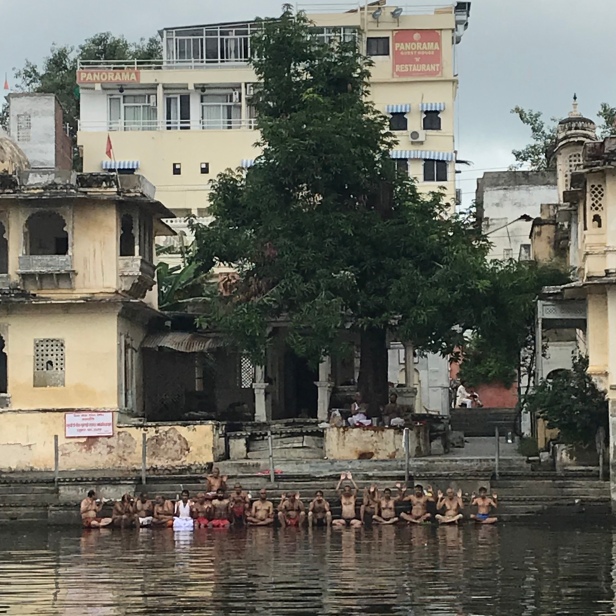 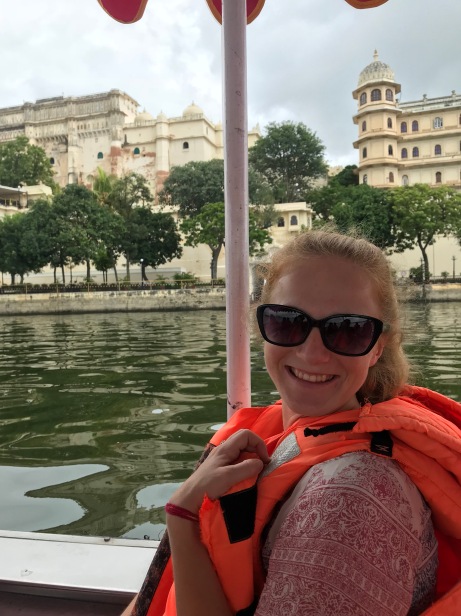 That evening, we went to Ambrai Restaurant (where they filmed The Real Marigold Hotel) for sunset, where we feasted on delicious curries, tandoori, and cocktails. As the sky got darker and the lights in the city and the palace came on, we spotted huge bats stalking overhead. 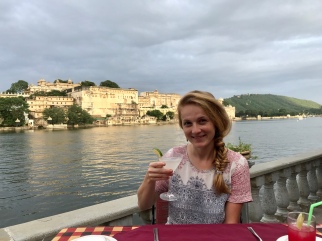 The next day we headed over to the Princess Gardens – designed especially for the ladies of the royal household to entertain themselves in. The gardens were cool and beautiful with many fountains where the women used to bathe and play, surrounded by flowers and trees to preserve their modesty. 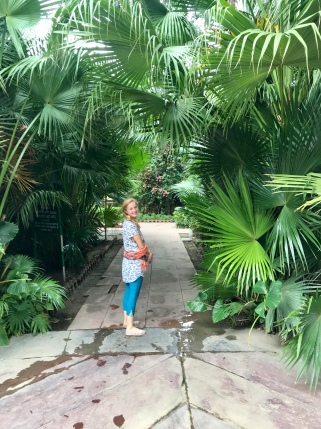 In the evening, we took the Ropeway cable cars up to the summit of a hill on the south side of the city. While the sky was clouded, we were still rewarded with panoramic views over the city and beyond, and a burst of colour through the clouds as the sun finally descended beyond the horizon. 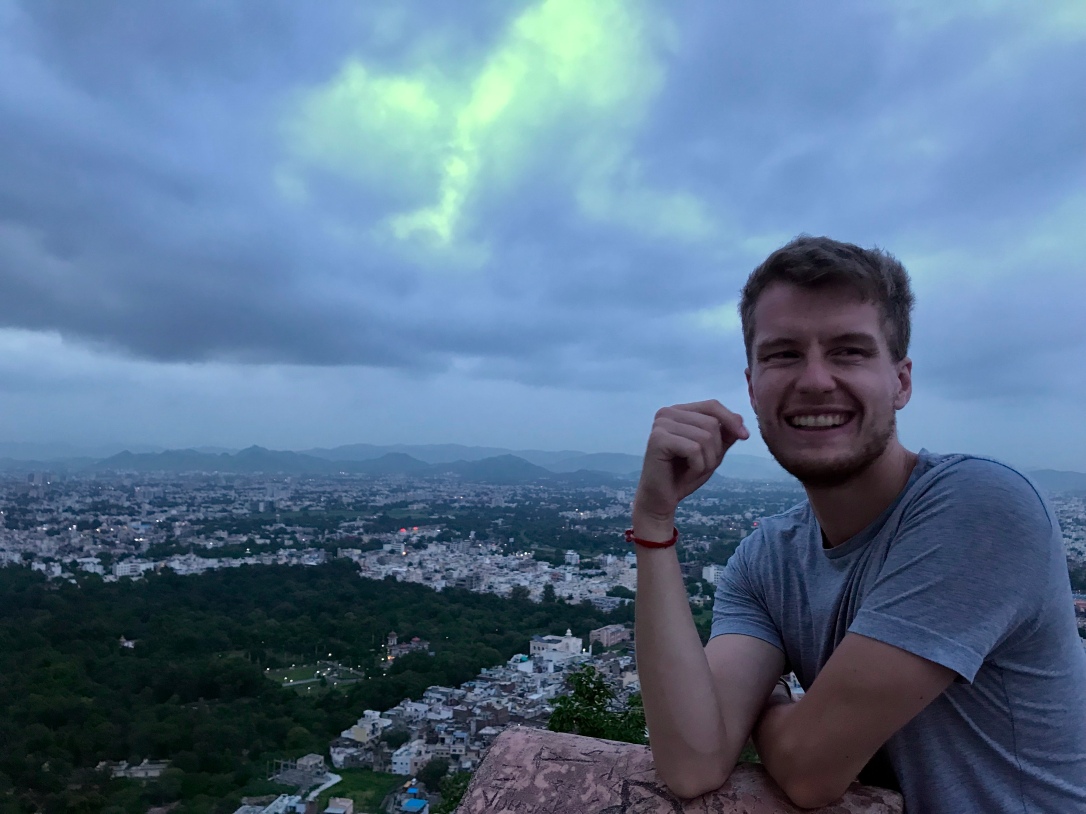 After a couple of days enjoying Udaipur, it was a wonderful way to say goodbye to this romantic city of lakes. Next stop is Jodphur the blue city…